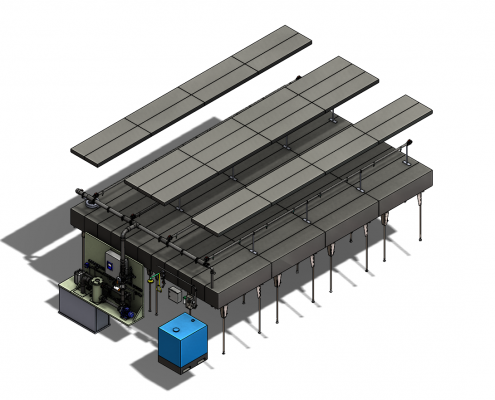 Last year Big Dutchman provided a biological air scrubber to David Grone, a pig farmer located in Prat, in the region of central Brittany, France. The farm is home to 450 sows and the plan was to build a new 3000 piglet building. Big Dutchman was asked to quote for the complete farm Ventilation system which included, CL 1540 ceiling inlets and fans all controlled by the MC 310 Computer.
At the time, it was agreed to design the building with a central exhaust system for easy capture of air for cleaning. It was a requirement on the permit that good air cleaning was provided, due to the location of the building and the need to protect the environment and local neighbours from harmful emissions and smells.

The initial phase of the project did not include air scrubbing as part of the build, which was quickly picked up by the local authorities during their first visit. Due to our simple approach to use a modular system. It meant the unit was specified for 3000 piglets, built, installed and commissioned within one month. This meant production could continue undisturbed and no issues with the local authorities. Using a central exhaust also made the task of retro fitting relatively cheap and simple. The total time to install, plug into the farm and commission took less than two days for one engineer to carry out. At the same time, training was provided to the local support team, to carry out maintenance and manage this and subsequent installations in the region. 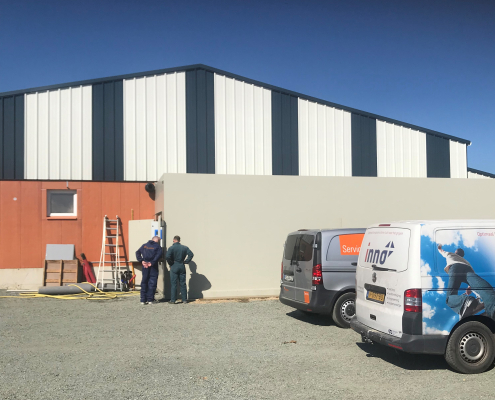 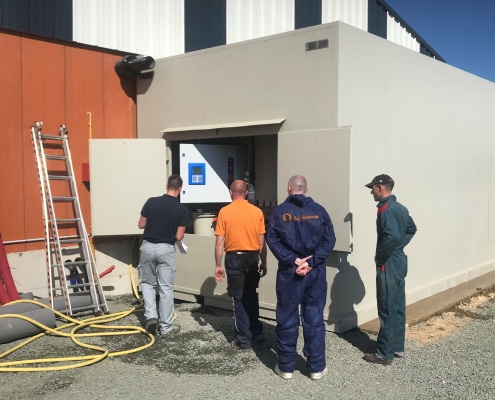 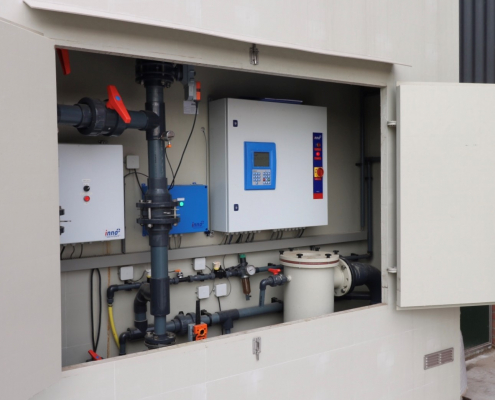 The air scrubber used for this project was built and tested at the Inno+ factory in the Netherlands and then shipped as a single unit to the location for installation. The unit was designed to deal with 110,000 m3/h max air capacity, delivering the levels of ammonia, dust and odour reduction required to meet permitting using the Dutch BWL certification. This ensures good levels of air abatement for pig production. The system is fully automated, ensuring that levels of pH and Nitrogen are maintained for optimal performance. Wastewater is managed and sent to a storage tank when concentration levels raise above the threshold and is replaced with fresh water when necessary.

How has the customer found working with this system?

´We installed the Big Dutchman Porcus air scrubber at the end of our piglet building last year. The system is low maintenance and easy to clean, this is mainly due to the way the system automatically manages itself. This means the wash water runs at optimal concentrations to guarantee clean air leaves the building. We are very pleased with our decision to invest in this type of system and would recommend it to anyone needing to install air scrubbing´.

The Porcus range of air scrubbers are specifically designed for ease of transport and installation around the world. This means a ready-to-use, proven solution for countries where permitting authorities are trying to establish a benchmark for air cleaning on Pig farms. The Big Dutchman group can deliver a product with 18 years development, testing, certification and proven experience behind it.