AIRSCRUBBERTABS consist of a mixture of inorganic salts that work together in synergy. This unique, patented formulation works on the biofilm, which are the thick layers of slimy build up that develop on the packing media of an air scrubber.

Biofilm is formed by a combination of bacteria and waste products. Bacteria produce a polysaccharide layer to protect themselves against biocides. This causes problems, because the system becomes full and the packing media gets clogged, causing fans to consume excessive power and resulting in suboptimal ventilation.

For years, biofilm has been removed from air scrubbers through chemicals, acids, or manual cleaning. This is time-consuming, environmentally unfriendly, costly, and not without risk. AIRSCRUBBERTABS are an effective tool – an environmentally friendly solution for maintaining optimum cleanliness of your air scrubber. AIRSCRUBBERTABS work where the biocides cannot reach, namely under the biofilm. The tablets loosen and break them open, making bacteria vulnerable to a biocide. This makes the biocide much more effective.

AIRSCRUBBERTABS are NOT a biocide themselves, but rather they work hand in hand with biocides.

They create a protective layer on the packing media that greatly reduces new bacterial adhesion and biofilm formation.

A dosage of just one tablet per week is often enough. In the case of very heavily soiled packing media, a double dose may be required for the first few weeks. 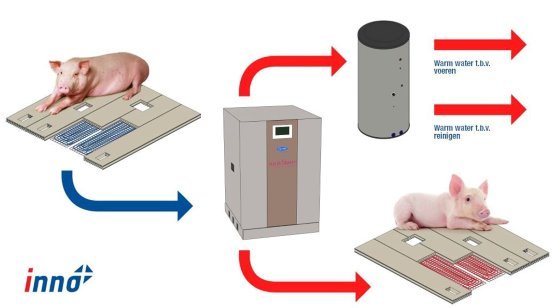 Contamination of the packing media is a common problem. We have the solution!

Call our sales department or mail your order to sales@inno-plus.nl.