During 2020 and 2021 Inno+ worked in collaboration with the Institute of Agricultural Engineering, University of Bonn, on a case study to determine the benefits of using regenerative energy from “exhaust air treatment systems” (Air scrubbers) for cooling and heating of animal houses.

Pig husbandry leads to emissions of ammonia, dust and odour, which can affect both local residents and nearby ecosystems. The use of Air scrubbers serves to separate and reduce these emissions. In some German federal states, the use of these systems is required in the approval procedures for individual facilities. The keeping of pigs in closed houses requires energy, for example to allow proper operation of the ventilation system to maintain the room temperature according to the requirements of the animals. It is the task of the ventilation system to remove polluted air inside the barn compartments and replace it with fresh air. The use of heat recovery systems makes it possible to transfer energy from the warm exhaust air stream to the incoming cold fresh air stream and thus reduce the need for other more costly heating in the barn.

In the “EnergARA” research project, three specific housing systems, which use an exhaust air treatment system in combination with heat recovery, were investigated over long periods. Recording of the power consumption of the individual systems, as well as the air and water temperatures at different positions within the barn were used to determine the efficiency and capacity of the heat transfer. The analysis of the collected data was used to show economic, ecological and animal welfare-based evaluation of the individual plants as well as their combined benefit. The aim, to identify possible synergy effects in order to answer the question; to what extent exhaust air treatment systems can be used as regenerative energy sources for the heating and cooling of pig houses. The research project intended to show contribution to the improvement of energy and resource efficiency in modern pig farming.

Long term measurements in pig husbandry buildings using exhaust air treatment and heat recovery systems from various manufacturers, under practical conditions. The measurement periods were planned for at least 1 year for each technology.

The available measurement period was for 7 months between 24.11.2020 – 30.06.2021.
It was noted the measurements during this cold period could overestimate the performance because of ‘many cold days or months’, respectively. 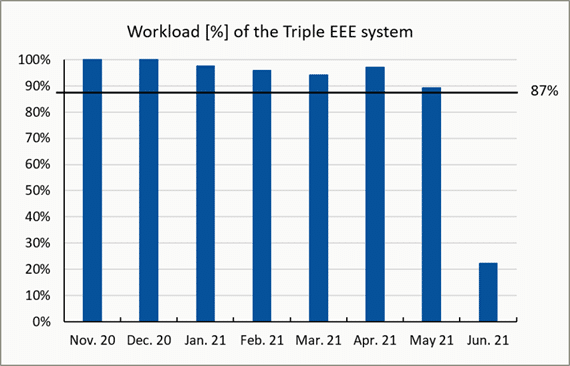 Workload of the Triple EEE system during this period was on average 87.0% (max. 100% in December 2020, min. 22.2% June 2021). This means the system was running 87% of the time, contrary to what many farmers believe, that it only runs during the extremely cold periods.

Average temperature amplitude damping between outdoor- and supply air: -33.1% (max. -48.7% in April 2021, min. -13.6% June 2021). Amplitude damping is the ability of the system to reduce the difference between minimum and maximum air temperature. This is particularly important in the transitional seasons of spring and fall, when temperatures are already cold at night but still very warm during the day. An example is given in the figure by the temperature profile of the 14th February 2021. The lower the amplitude, the more uniform the ventilation, and thus the air quality and temperatures in the barn. A constant barn climate has a positive effect on animal welfare and health and can thus contribute to good performance. This also leads to economic benefits for the farmer. 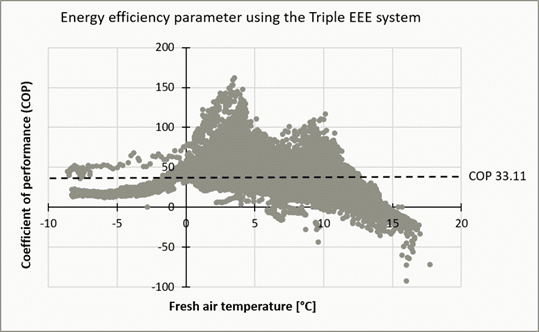 Preliminary results show that the total thermal energy recovered was 259,425.63 kWh. The energy efficiency could be improved; In the first six months of measurements, per kWh of consumed electrical energy 33.11 times more thermal energy could be recovered (COP = coefficient of performance).

The recovered thermal energy can reduce the consumption of liquid gas for heating the animal houses, which is associated with the generation of CO2 emissions. Thus, heat recovery cannot only lead to savings in heating costs for the farmer, but also have positive impact on the released CO2 emissions which affect global warming. For the mentioned period, heating costs could be reduced by 1.54 € per animal place and, in addition, 5.32 kg CO2 per animal place were saved.

If you are interested in further and more detailed information and results of the project, please feel free to contact Mrs. Dr. Alexandra Lengling or Mr. Hauke Deeken of the University of Bonn, Germany.

For more information about the Institute of agricultural engineering Bonn – https://www.landtechnik.uni-bonn.de/en

The three main research subjects under the chair of Prof. W. Büscher:

Website Livestock Technology – Research projects About this project (in German)